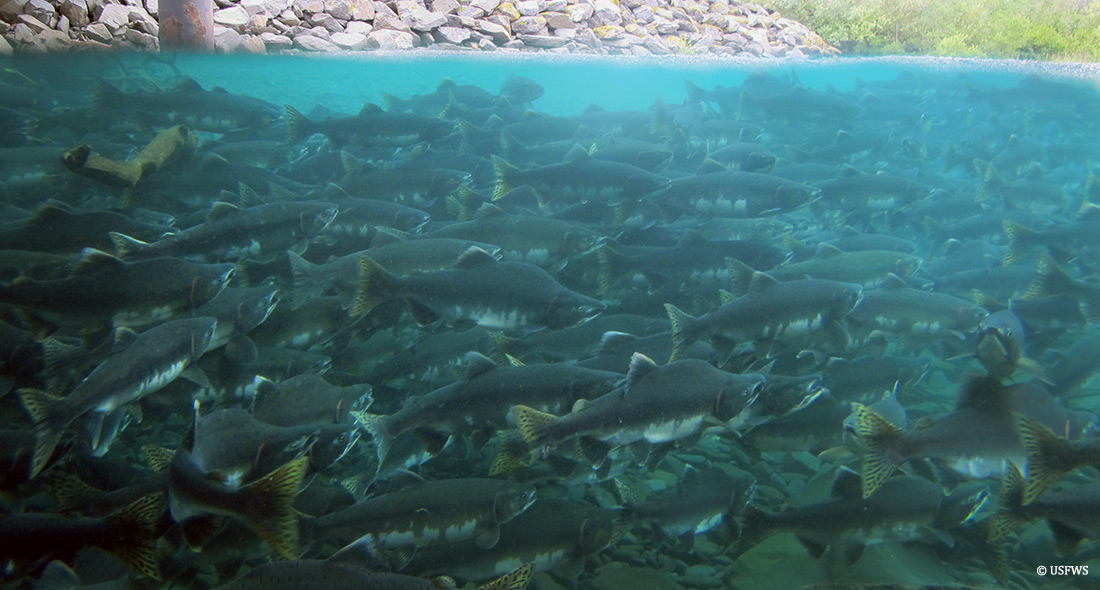 Accounting for 40% of global wild salmon production, the Russian Far East is home to some of the most prolific salmon runs on the planet.

While salmon runs and fisheries are flourishing on the Kamchatka Peninsula, Sakhalin Island is now in the midst of its sixth year of low salmon returns according to data from North Pacific Anadromous Fish Commission (NPAFC). While it’s difficult to pinpoint the exact reasons for declining returns, poaching and oil and gas development are the two most commonly cited reasons. Unfortunately, this season is shaping up to be another bust as Sakhalin fishermen have only been able to harvest 28,600 metric tons of pink salmon so far.

Russia, like many parts of the salmon world, has turned to hatcheries as a way to boost depressed salmon runs. Hatchery production of chum and pink salmon in the Russian Far East is primarily concentrated on Sakhalin Island and Iturup (close to Japan), where hatchery infrastructure has existed since before WWII. According to NPAFC, in recent years these islands alone accounted for an astounding 85% of the country’s hatchery releases.

In 2008, while still a program of Wild Salmon Center, the O2 team facilitated a Marine Stewardship Council (MSC) pre assessment of the Sakhalin salmon fishery. This pre-assessment shed light on the practices and management of surrounding hatcheries and the need for changes.

Despite widely distributed and accredited research concerns regarding potential negative interactions between wild and hatchery-raised fish populations-- for instance: a loss of fitness due to interbreeding, competition for resources, influence on the homing processes of neighboring fish, and spread of disease, all of which can lead to declines in wild salmon populations-- Russian authorities rapidly expanded hatchery releases from 573.8 millions of pink and chum in 2000 to 904.4 millions in 2010, roughly a 40 percent increase over 10 years (NPAFC data). Many of these hatcheries were built on the largest and most prominent natural spawning rivers in the region, increasing the potential for negative impacts on wild salmon populations. Furthermore, there were no marking systems in place to monitor the impacts of hatcheries on wild salmon runs, a recommended best practice in hatchery management.

Hatcheries were pumping out hundreds of millions of fish without any way of measuring of the impacts this was having on declining wild populations.

As hatcheries emerged as the single greatest impediment to MSC certification, reform efforts gained traction among major stakeholders. Our team began working with government hatcheries in 2009 to mark otoliths (ear bones) of chum and pink salmon in the Sakhalin and Kuril Islands. This was effectively the first program of this nature in the Russian Far East. One year later our scientists were in the field sampling salmon carcasses to conduct otolith analysis. This allowed us to estimate the proportion of hatchery fish in fishery catches, escapements and hatchery broodstocks, and to compare relative differences between hatchery and wild populations such as the duration and dynamic of runs, size-sex composition, and survival indices. The findings from this work planted the seeds of significant hatchery management reforms to come.

This was effectively the first program of this nature in the Russian Far East.

Scientists found that almost 20% of fish in the main rivers of Southeast Sakhalin were hatchery fish, meaning the survival rate of these salmon was significantly lower than their wild counterparts (yet fisheries were indiscriminately targeting both hatchery and wild salmon assuming mortality rate was equal). Based on these data, future hatchery development shifted to river systems without strong naturally occurring runs. Russian scientists also found chum salmon hatchery programs might generally be more effective than pink salmon programs in some areas. The focus turned to producing hatchery chum for commercial harvests. Meanwhile, wild pink populations would be allowed to recover with less pressure from competing hatchery fish.

Fast forward to 2016. After eight years of work in the region, government hatcheries now mark an impressive 65% of all pink salmon and 61% of all chum salmon released into the wild.

Moreover, Russian hatchery releases appear to have plateaued (the United States and Japan continue to release more hatchery fish into the ocean than Russia does). While just one piece of the puzzle, good hatchery practices are vital to ensuring sustainable fisheries. With better practices in place, we’re hopeful Sakhalin runs and commercial fisheries have started the long path to recovery.