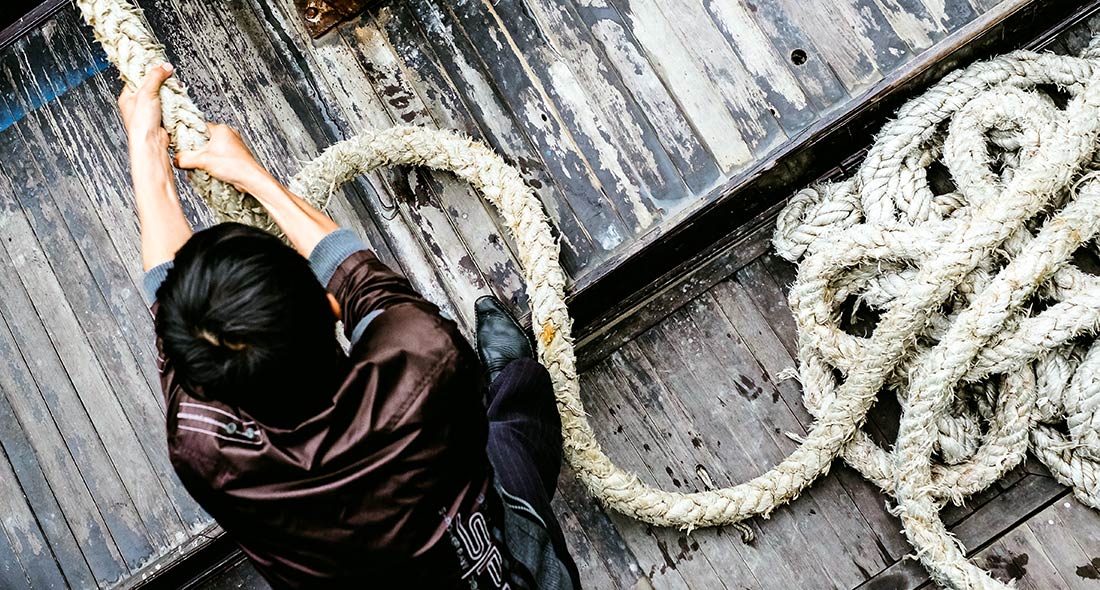 Korea is a top ten producer of seafood and the world’s fifth most seafood loving region—only China, Japan, the United States, and the European Union consume more seafood annually.

As such, the global sustainable seafood movement must engage Korean fisheries. With the hire of Jiehyun, who joined O2 in July, we’re excited to grow our on the ground fishery improvement work in this key seafood producing and consuming country.

On a recent trip to Korea, Jiehyun coordinated an interview between local journalists and O2 President and CEO Dick Jones in which Korean sustainable seafood needs and priorities were discussed. The following interview appeared in the Kyunghyang Daily Paper on September 14th, 2017 and was translated with the author’s permission.

Fish resources in shared waters between Korea, Japan, and China are threatened by competitive fishing efforts

Ocean Outcomes (O2), a new NGO committed to sustainable fisheries, is starting projects aimed at protecting fisheries and fish resources in Korea. Launched in 2015 by Wild Salmon Center, which has 25 years of history working with salmon fisheries across the Pacific, O2’s region of focus include Korea, China, Japan, and Russia.

“Korea, China, and Japan share common fishing ground and over exploitation will lead to the depletion of species. It is very hard to manage fishing resources due to the complexity of political relations amongst these nations. If NGOs such as O2 can help facilitate the discussion of sustainable fisheries between these nations, progress will be made. For example, Korea and China have disputes regarding crab and squid, and we would like contribute towards solving these problems.”

O2 envisions a future with healthy aquatic ecosystems, a plentiful seafood supply and thriving fishing communities, which differentiates O2 from conventional NGOs only focused on the environment. According to Dick, “it is not appropriate to advance western standards and ask Asian nations and fisheries to comply with these criteria. We can only find a real solution when we respect the reality and tradition of fisheries of each country, and when we understand the issue in a local context.”

Dick was raised in Boston in a family which worked in the New England cod fisheries. He realized the importance of sustainable fisheries when he experienced first hand how his family business and his neighbors were affected by the collapse of cod stocks in 1990s.

O2 is pursuing sustainable fisheries in countries like Korea, Japan, China and Russia, as these areas are the top regions in terms of seafood production, processing, consumption and exports. According to Dick, “Korea, China, Japan, and Russia make up 80% of imported seafood into the US, so their influence is disproportionate in regards to the global seafood industry. We’re focused on this area as any depletion of fish resources here will lead to global crisis.”

Dick explains further, “We have projects in China to improve crab and squid fisheries. We’re educating fisheries there about how to comply with catch limits, and if they comply with these criteria, we facilitate introductions to buyers in the EU and US, which is an incentive for the fishermen. If Korea joins this movement, there could be opportunities for collaboration amongst regional countries to protect and improve fish resources in Northeast Asia. Given the collaboration required, NGOs can help facilitate conversation through roundtable discussions”

O2 knows well that fish resources, once depleted, are not easily recovered. That’s why O2 is so actively pursuing sustainable fisheries in Northeast Asia. Stock depletion can harm fishermen and local communities, as Dick reminds us, “The area near Newfoundland was very rich in cod, aptly-named ‘Cape Cod’. But since the end of 1970s, overfishing was accelerated with more sophisticated and efficient fishing fleets, and the cod fisheries collapsed in 1990s. And while government have been heavily invested in stock recovery programs for 30 years, catch volumes still remain 1/100 of their historical levels.”

Korea too has suffered from decreased catch in coastal waters. Total catch of domestic waters fisheries last year was 910,000 mt, the lowest level in 44 years. The catch of mackerel, ‘people fish’, in the first half of this year was 42% less when compared with same period of last year.

Dick continues, “Many people are concerned about the price of fish, but they’re not paying attention to the decline of fish resources. And it’s not easy for the government, often aware of the crisis, to conduct a precautionary recovery program because of the resistance from fishermen. An NGO could play a role to help this situation.”