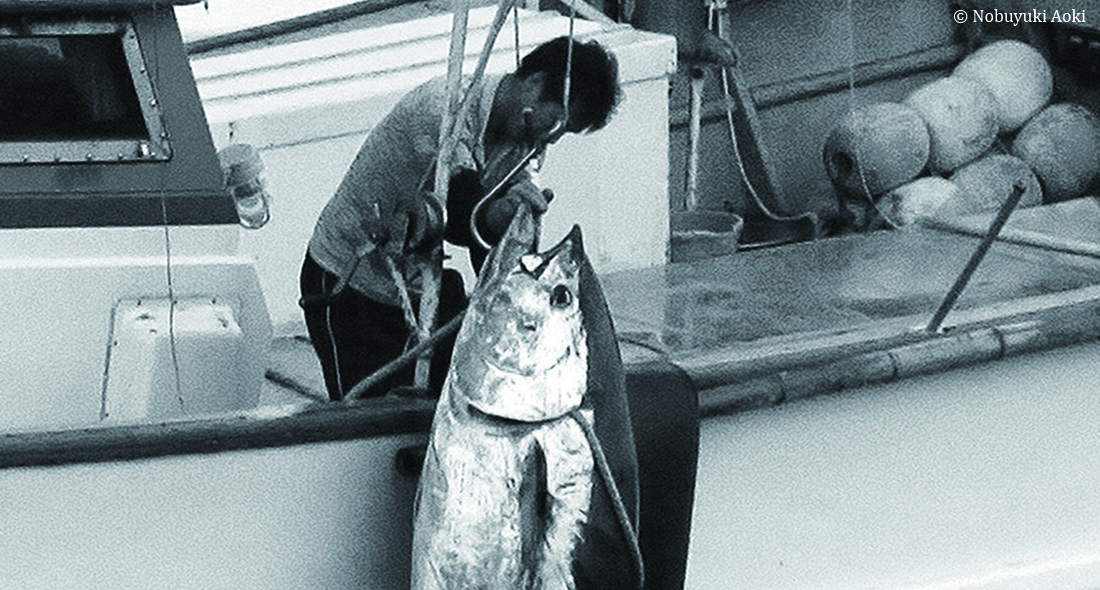 Cherished and loved by sushi connoisseurs, Bluefin tuna (“hon-maguro”) is a pillar of Japanese traditional cuisine. In fact, the Japanese consume 80% of the world’s Bluefin tuna.

Unfortunately, these giants of the sea are becoming increasingly scarce; the species was recently listed as “Vulnerable” to extinction on the IUCN Red List. Commercial Bluefin tuna fishermen in Japan, whose livelihoods depend on these fish, know well the fishery is in decline but are not always in the position to take action. However, one fishery, the Iki Island pole and line fishery, has taken unique measures to halt the decline of their resource. Starting this year the fishery has voluntarily banned fishing for spawning adults, at great sacrifice and expense to their (short term) business interests.

The following lament was read aloud by one of the Iki Island commercial fishermen during an official hearing by the Japanese Fishery Agency on the situation of Bluefin tuna in Japan.

Seafood, a cultural heritage of Japan,
A blessing from the sea!
We the fishermen have been a part of this

When I became a fisherman over 30 years ago,
I never doubted the infinite abundance of marine resources
I was provider of Japanese food culture
Fishing was an honorable, attractive profession

What is it now?
A million fishermen have been reduced to one hundred seventy thousand,
Our micro enterprise is about to disappear

My eldest son was away studying
He made the decision to return to our island this New Year
To seek employment, but there is no industry to speak of here
It used to be eldest sons of fishermen,
Had no second thoughts about carrying on the tradition
Sons of fishermen admire the work of their fathers
And wishing to be like their fathers, they go to the sea

But, I did not let him become a fisherman
Our generation is emptying the sea of marine resources
Which we should preserve for future generations
What sorrow that this is the absolute truth

Fishing tuna with pole and line
Allowed me to send my three children to vocational school and university
My children understand what tuna means in their lives
They respect their father who cares about the tuna fishing he loves
And urge me to fish tuna until my physical strength is gone
I am filled with gladness!
Yet when I think of the sea today
I am filled with dire alarm
Can tuna fishing continue?

The world is shouting
Tuna in aquariums are dying
But does the world know
Pacific bluefin tuna, listed as an endangered species
Is fished in massive quantities on their spawning grounds
Before the tuna can reproduce?

In my hometown Iki,
Many people make a living by pole and line fishing
As we take action to help tuna recover,
It makes us sad when we hear some say
“Inefficient fishing method should disappear” or
“Why not switch to a more efficient way?”
If the resource is depleted, everyone suffers

We want the resource to recover,
And to realize sustainable fisheries
Better fisheries in remote regions,
Will reestablish local economies

If technologies and fishing exceed natural production
Resources will diminish without effective regulation
If the fishing takes place as usual this year,
We think tuna will be no more in the Sea of Japan
What can we do as fishermen?
We must continue to make our voices heard

Those of you reading this
Are interested in resource management
Please tell as many people as possible,
Of the story you’ve just read
If people know the truth
Maybe things that did not change in the past will change
If that happens tuna resources could recover

And my sons who work in other industries
Will once again be proud
And a father will welcome his sons into his profession
With appropriate resource management,
Fishing industries can become revitalized
Resulting in the rebirth of remote areas