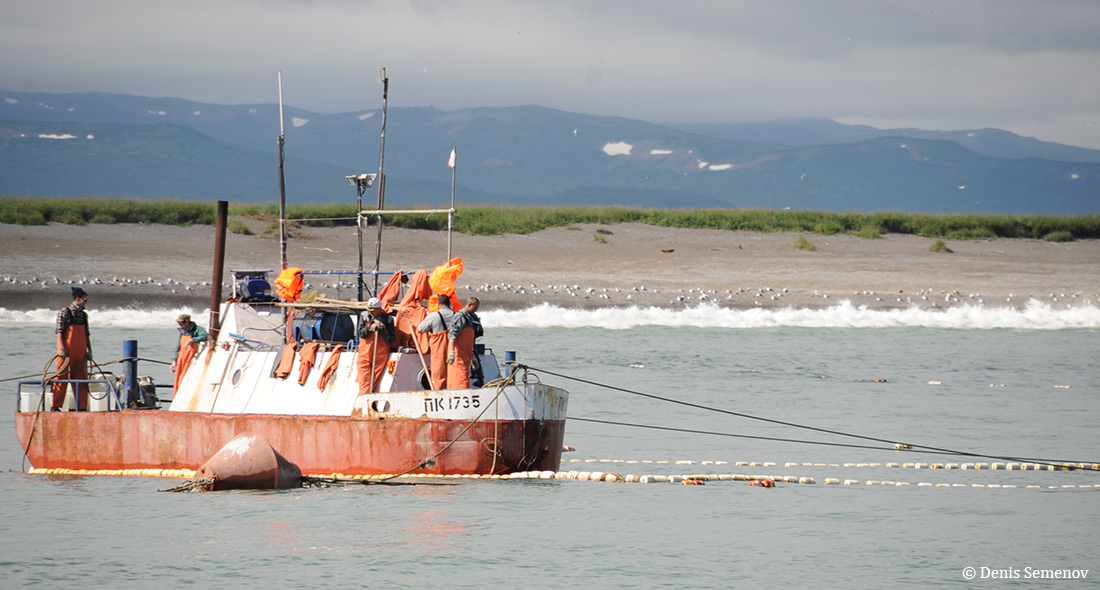 Spanning the length of an entire continent, Russian fisheries take many forms.

In their entirety Russian commercial fisheries target over 170 species of finfish and more than 100 species of invertebrates. Recent total wild catch in Russia has consistently exceeded four million metric tons, over half of which is harvested in the Russian Far East (RFE), a target region for our fishery improvement work. Sparsely populated with under seven million inhabitants, the human footprint in the RFE is minimal, and the untouched wilderness is home to some of the most productive marine and freshwater ecosystems on earth.

Primary species caught in the RFE are Russian pollock, Pacific herring, Pacific cod and Pacific salmon (pink, chum, sockeye, Chinook, and coho). While pollock and herring are caught in larger volumes, salmon is arguably more integral to Russia in both economic and cultural contexts. Salmon has long been a traditional food source, and subsistence use remains high. Much like for native societies in Alaska, salmon is a key food and livelihood for those living in the RFE. As a commodity, salmon is more valuable than other species caught in Russia, and as an anadromous species, salmon provide unmatched ecological benefits to the watersheds in which they spawn. Other species of importance caught in the RFE include Pacific mackerel, Pacific saury, Pacific halibut, haddock, and king crab.

Of the roughly seven hundred fishing companies in Russia, over half are located in the RFE. However, with only a handful of significant cities, the processing infrastructure in the RFE is limited. As a result, Russian fisheries are often at a competitive disadvantage relative to other fisheries around the Pacific which catch the same species. Partially due to the lack of sufficient infrastructure, Russia is a net exporter of seafood (both processed and unprocessed), and situations where seafood is exported for processing only to be imported for Russian consumption aren’t uncommon.

Along with the need for improving capacity, Russian fisheries also face significant fishery improvement needs. The big issue is Illegal, Unreported, and Unregulated Fishing (IUU). It's a complex socio-economic problem that manifests itself in many unfortunate ways. All seafood companies that want to source from this region need to understand the risks and be diligent with their supply chains.

The concentration of Russian fisheries and processing capacity in the RFE put it in the top tier of globally important fishing regions and progress in this region is vitally important to the success of the global sustainable seafood movement. Productive marine fisheries in the RFE are ripe for improvement efforts that help close loopholes for illegal activity, bolster fishery infrastructure, and build value for fishermen.

We conduct rapid assessments (see the Russian fishery summaries here) of strategically important fishery species to better articulate the fisheries landscape and to clearly map out the potential for fishery improvement and third party certification of fisheries targeting these species. These assessments will help inform policy, management, funding, and the direction of sustainable seafood work across the globe.

Stories from the Field: Russia